In the volatile industry of hospitality, surviving the first year is extremely critical. Anything between the five and ten years following is considered as

reasonably successful, and ten to twenty five somewhat iconic. In that context, any restaurant trading in its fifty first year deserves a closer look at the overall philosophy that has underpinned its staggering longevity. Much has already been written about the benchmark defamation case between Fairfax and The Blue Angel, but to speculate about that would unfairly detract focus from the quality of the food and service I experienced over three visits.

There is always something inherently charming about subterranean dining once you descend the stairs from Palmer Street into the bottom level of the three consolidated terraces, forming the ninety seat main dining area. The walls serve to record the fascinating history of the Blue Angel, with Burt Lancaster, Mohammed Ali, and all manner of social and political local and international heavyweights, leaving a memento of their visits. If that’s not enough, anyone who has watched

Underbelly can only imagine just how colourful this end of town was in its heyday, which only adds another layer to the rich tapestry that underpins the undeniable ambience. The street level houses a series of four impressive private dining rooms, offering a more formal option, although I prefer to soak up the warmth of the accumulated history below.

The Lobster Bisque ($28.00), not surprisingly, is a must. The dark thick consistency resonates with the pure flavour, primarily extracted from roasted crushed lobster shells cooked in an elaborate broth, which is reduced and then strained after six hours. If you have the stunningly presented Lobster carpaccio ($85), the bisque is thrown in as a second course. A slightly different take is the Misto Crudo ($85), which includes an impressive array of sashimi, fish, shellfish, and soup with the carpaccio. Often considered an unaffordable indulgence, this premium crustacean is clearly the star of the show, and is it’s prepared and presented according to your exact preference.

Without comparison in Sydney, and most likely in Australia, at any given time, up to 5 tonne of live lobsters are stored onsite in eight tanks, which allows them to be sold at $98 per kg. This is incredible value given the wholesale price is around $78, and in comparison to the Chinatown price, quoted between $158 and $178. This marked difference allows it to be accessibly priced in the diner’s favour through the capacity of being able to both purchase and store it when the market price is more favourable. Putting aside the price, the most important point is that the supply chain is totally controlled from the catch to the plate.

Leaning to the Italian element of the menu, the spaghetti Nero ($35.00), a stunning dish tossed in squid ink, and served with salmon roe, has a lovely lingering heat note, giving a nice counterpoint to the velvety texture. Risotto, a dish that I normally avoid due to the time constraints in busy kitchens, is laudably cooked from scratch to order, which also applies with the pasta listed on the menu. The deep earthy overtones of the generously incorporated large porcini are perfect against the textbook al dente of the rice, but the real key is the overall flavours are in perfect balance, and the consistency is just exactly where it should be.

The 12+ Security Foods Wagyu, cut and weighed at the table upfront, hits the plate at $20-$25 per 100g (depending on the cut). This represents exceptional value given the pedigree, flavour and texture that is delivered from this premium beef. Finished off and served tableside by Italian Chef Luca Bardella, who has worked extensively throughout Europe, the option of also sharing and comparing different cuts adds yet another dimension. A range of condiments are offered, which allows the produce to shine without overt complication, although a more elaborate Steak Diane, Filetto Rossini or Filetto al Pepe Verde is also available. For the more hardcore carnivore, 12+ classically prepared tableside tartare is yet another expression.

For those who somehow still have the room, the crepe suzette ($40 for 2) is worth ordering just for the pure theatre, as flamboyant Owner Marcello Marcobello spectacularly flames up Grand Marnier, Triple Sec & Cognac to finish off the dish. This results in deep caramelised orange notes that make you question why this classic dessert is not reprised more often. Other shared desserts worth consideration are the Strawberry flambé and Zabaglione (both $30), with Classic Crème Caramel, Panna Cotta and Tiramisu (all $15) in single portions. 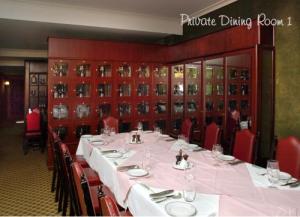 The Blue Angel respects the best aspects of old school dining, when service involved building a long standing rapport with diners, and celebration of the classics were an opportunity for the Chef to express his both his craft and generosity on the plate. Sadly, both the skill and theatre of table side cooking that once captivated the dining rooms of Europe, and locally in Sydney and Melbourne’s cuisine during its formative years, is nearly gone. Those who have only read about it in Larousse should experience it first hand, as host and raconteur Marcello Marcobello takes you on an unforgettable journey started by his father in 1961. Against the odds, The Blue Angel is still going strong today. Premium produce, generously portioned and cooked with care, sounds like a mighty good reason to forgive and forget, and just enjoy the food.