Restaurant Arras located in a stylishly renovated heritage bond store, strikes just the right balance between maintaining old world charm and integrating the practicality of modernism. Lighting is subtle rather than intrusive and is used to highlight the moody and dark interior to exceptionally good effect. Ironically positioned on “The Hungry Mile”, the generous portioning of Adam Humphrey and Lovaine Allen is anything but with their Southern Hemisphere re-interpretation of Northern British cuisine.

Dining on a particularly quiet mid-week night with only two other tables, the deft and texturally perfect pea and sorrel risotto strikes a promising opening note. The momentum continues with a visually spectacular salad, with well over twenty five component parts intricately plated for what usually just serves as a filler dish on most tasting menus. Next, served on the first of many rustic slates (e.g. The Great British Menu) are scallops two ways. One has been spiced and seared with absolute precision and the other is done in a ceviche style, highlighting the synergy of temperature contrast.

Service headed by Alon Sharmon is informative, professional and sharp and Arras is clearly across the detail that defines a solid and well established one hatter. The array of superbly baked in-house breads is evidence of such, as is the obviously spotless nature of restaurant, glassware, cutlery, plates and toilets. An impressive wine list provides enhanced flexibility for matching and is served with knowledge and genuine enthusiasm. 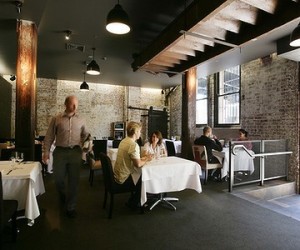 Our next course, spiced Mulloway is undoubtedly dish of the night. The skin is seared perfectly with the flesh seductively sweet and moist with the flavoursome lentils & bacon with mead and rye providing the ideal counterpoint. The astute use of spice and seasoning displays not only an understanding of balance but also the benefits of restraint.

The challenging duck, beak to tail feather could polarise some, but it is a brave heady dish that is absolutely true to the produce and truly highlights the repertoire of the chef. The joy of contrasting flavours and texture, not to mention the technical skill on display is surely sufficient justification for its existence on the degustation menu alone. 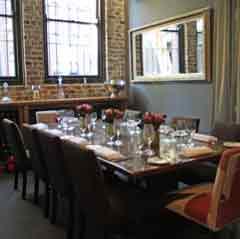 Between savoury and sweet, the abundantly stocked and seductively aromatic cheese trolley is an intelligent selection that covers the needs of every palette with an impressive selection of house made chutneys, bread and biscuits to accompany. Served just under room temperature, the true character of the cheese is allowed to be correctly presented. It is a benchmark by which others would do well to emulate, with the exception of Bilson’s, rather than just conveniently cutting it straight from the cool room more as an afterthought.

The original desserts, gingerbread soufflé and the famed liquorice allsorts are replaced by a peanut butter and jelly sandwich and a deconstructed inverted rocky road of sorts which prove to be very poor substitutions. I do not object to playful innovations or takes, but unless it has some meaningful foundation it just becomes another example of poorly conceived and totally forgettable whimsy. Fortunately, the massive slate of generous petit fours that follow are the exact opposite and finish the sweet element of the night on a slightly more redemptive note.

I am reticent to judge Arras too harshly, but unfortunately the very high standards it sets were fundamentally compromised by two consecutive experimental desserts which unravelled an otherwise flawless experience. However, the philosophy and pedigree that underpins Arras are clearly too impressive to consider it a true reflection of its potential.