Neila, a regional icon hatted since 2003 committed to sourcing the vast majority of its produce within a 100km radius should comfortably satisfy the expectations of those prepared to make the culinary pilgrimage to Cowra to support such models of local sustainability, yet I leave so underwhelmed by the whole experience I can only reasonably assume my visit must have been an aberration. What other plausible explanation exists, but why the obvious contradiction of an ill conceived take-away option, touted as being microwavable, at the rear of the menu?

The interior, a juxtaposition of two cultures works in a charming kind of way, so it is unfortunate the arrival of every guest is resoundingly announced by their repeated clanking on the interior metallic ramp which surely could be damped to avoid this unwanted and intrusive noise that tends to grate on one throughout the course of service. The open nature of the kitchen and main dining room with uncovered wooden tables does not lend itself to any noise absorption, so why keep the ramp less second entrance locked?

Perusing the stylishly bound menu, what strikes me immediately is just how compressed the menu is with only four entrees ($20), mains ($35) and desserts ($16) with surprisingly no option of bread offered to us at any point, either gratis or charged. The sparkling water ($7) also evaporates after one bottle, so its unfiltered town water or bust to accompany your byo ($3 pp). Surely, a quick trip to the local supermarket prior to service would have been in order, rather than apologetically pouring out the flat remnants from another previously opened bottle. 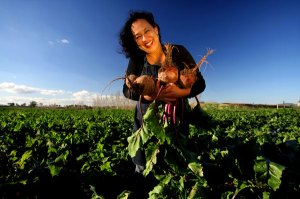 The pumpkin ravioli with mushroom is generously sized with the sweet puree interior undeniably delectable, however it deserves far better than the overt thickness of the house made pasta covered with a clumsy toasted barley sauce that lacks both nuance and definition. Conversely, the trout soup and croquette is fully defined in flavour with excellent balance which lingers seductively on both the palate and mind long after it’s polished off. Likewise, the tea smoked lamb, tofu and fennel salad is full of interesting and subtle contrasts, but in comparison the bland poached rabbit salad with ouzo dressing fails badly with under seasoning not showcasing the produce fully.

Whilst the kitchen’s standards may have spluttered under the weight of too many simultaneous covers, one positive note is that the refreshingly professional and attentive service led by Jerry Mouzakis which does not skip a beat the entire night and sets a benchmark for regional service in the outer West. His handling of the wine demonstrates both knowledge and insight, with the decanting and stemware as good as that reasonably expected within the CBD.

Three mains and not even the signature caramelised pork hock wows, which is tender but not sufficiently crispy on the exterior. The accompanying poached cheek, despite being cooked to perfection, is horrendously over spiced and massively out of balance in contrast to the other elements on the plate. Sadly the duck breast, kimchee and carrots is accompanied by an overcooked rice cake which is simply overdone and texturally unacceptable. The venison with celeriac, Tuscan cale and smoked olive is solid but yet again uninspired. I sample 9 of the 12 available courses, with under seasoning and low serving temperature noticeable with every savoury course. The plate warming, where intentional, is patchy and conservative at best given that outside temperatures are near or below zero.

Desserts arrive and unfortunately the vanilla bean rice pudding is bordering on beige, neither lifted by the white chocolate or the violet ice cream. The lemon verbena brulee is far too sweet and the cherry jelly base is novel without really adding anything, much like the chocolate ice cream which lacks relevance to the overall dish. Thankfully, at least the coffee that follows is freshly ground and well extracted.

Perhaps Neila just had a particularly bad night, but when the bin in the toilet is overflowing with hand towels mid service and empty Jim Bean cans from the larger table adjacent to us sporadically line the returning corridor with half opened wine glass boxes, it is clearly not a good look.  I also ponder why friends and family, albeit well behaved, are unprofessionally allowed to be seated directly next to us in the main dining area midway during service when they are clearly not dining and just playing electronic games to pass the time. It just further highlights that the overall standard and attention to detail has been sadly remiss tonight and whilst being cognisant of the industry awards Neila has consistently received, and presumably deserved in the past, I depart into the night somewhat bemused with the overall experience or lack thereof.