I saw the golden age of gastronomy. I saw that beautiful, romantic period. And then the world changed.

The romance of dining is the unspoken ‘grail’ within the world of hospitality. Without it we would simply be fulfilling a biological need that would never nurture the soul, or imprint our priceless sense of memory. The act of giving and sharing, with a truly heartfelt duty of care, underpins any memorable restaurant experience. Very few ever get that elusive mix right, ultimately ending up feeling overly contrived, and not particularly genuine. However, you sometimes find that rare gem which touches your heartstrings, and makes the tapestry of any food journey worthwhile. Libertine, no sooner found in my case, is now  gone, but it would be remiss of me not to reminisce over the passion they showed their diners throughout the years.

Libertine is the classic French Bistro with large gilt mirrors, plush banquettes, and intimately set tables adorned with pristine white napery, and cluttered settings that has wooed us ‘en masse’ since the early nineteenth century. Cue dimmed lighting and classical Parisian music, with the haunting memory of old-world wine bottles also showcasing the room, and most hearts will skip a beat amidst such ambience. The seduction is complete when I observe the respectful and nuanced pace of the service, which gently lulls you into their rhythm, and philosophy on food and wine. The message is simple; relax, enjoy, and chances are your troubles of the day will wash away with the background laughter and joy of others doing the same. That ritual of sharing conversation over food has inspired and elevated humanity since the beginning of time. It not only defines, but develops and shares our individuality. 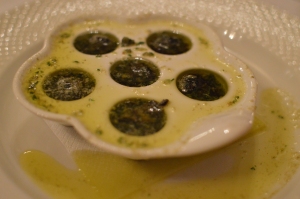 Starting with an eggplant and blue cheese soup that is refreshingly not overworked, with a lovely thick comforting texture that conveys clarity and depth of flavour, rather than focussing on consistency alone. Fromage de Tête, with toasted brioche and relishes, demonstrates sound old school technique. The grilled local eel with cress soubise that follows is showcased by a thick rasher of crisp ‘in house’ cured pork belly delivering extraordinary core flavour. Restaurant Manager Zoë Ladyman recounts that Libertine’s customers wouldn’t let them change the room or style of the food, and feeling so strangely connected after only two visits, I can understand why.

Having recently emerged from the age of molecular gastronomy, and various other phases of deconstruction, minimalism and re-interpretation; the simplicity and joy of the Escargot de Bourgogne is breathtaking in terms of pure gratification as anything else I have had recently. The pleasure of a timeless uncomplicated dish, done without ego, and from the heart, is what food is truly about at the end of the day. It shines again on a revisit, with even the table adjacent having a ‘moment’ with it, ordering it in place of dessert, after having being swayed by the aroma wafting from my dish.

Some restaurants offer BYO reluctantly, predominately given the monetary impact it has on their margins, and in the current volatile environment that is entirely understandable. However, being a privilege rather than an entitlement, it remains reasonable to expect that the diner brings a bottle that is either unavailable, or not too similar in style and price point to what is being offered on the wine list. A glance at the empty bottles on display quickly affirm that diners entrust Libertine with their special cellar bottles, and the careful handling of what I brought reinforced exactly why. Mutual respect and love of wine begets a truly shared vinous experience, and therein lays the real joy.

Libertine was one of the few restaurants still brave enough to proudly offer Cassoulet and bouillabaisse, not simply because both are part of French culinary folklore, but also because of the unbridled joy and fulfilment those dishes still bring diners. Classic dishes never lose relevance, unlike the trend driven Chefs who mistakenly overlook them, as they pose a true test of skill, passion and craft. Those benchmarks are not only met and surpassed, but embraced here. The greater moral being: always be true to your core ideals, and the food on the plate will reflect that honesty every time. 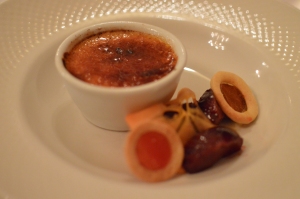 produce is guaranteed. No paco jets or sous-vide technique, just old-fashioned sautéing and roasting, with the real aromas of cooking permeating seductively throughout the room. Some dishes take longer than others, but I do not observe anyone becoming fractious or complaining, in fact the opposite, as the wine and conversation flows. How easily we can forget such simple pleasures, in an era of tables being turned quickly, and the art of service being compromised in exchange for aimless queues and worthless ‘dude’ food, that culinary history will ultimately judge harshly.

With a strong background in a patisserie/café/bakery when at Le Traiteur, it comes as no surprise that desserts (and bread earlier) are so well executed by Chef Nick Creswick. Orange blossom crème brûlée, with sable and marinated berries, is flawless, as is the dark chocolate clafoutis, with rhubarb compote and vanilla anglaise. Similarly, a deconstructed dark chocolate tart, with passion fruit and white chocolate sorbet, is stunning in both its simplicity and execution. Petits fours and well extracted coffee maintain the standard, as the Chef respectfully gets around to every table, whilst customers linger over Armagnac and other digestifs. 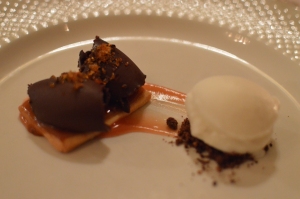 The joy of dining is all about the shared experience between restaurant and diner. That cannot be diminished without trust being forever lost on both sides. Libertine, without chasing critical acclaim, unconditionally believed in fostering the romance of dining, sadly an ideal that is slowly being traded and eroded away for little or nothing of substance in return. This charming little Bistro that opened in 2005 by Nick Creswick and Zoë Ladyman in North Melbourne might be gone, but not the memory of what it stood for. How spirits soared as the room embraced the simple act of sharing food and conversation in an environment entirely conducive to that…