There is something special about dining adjacent to a bay or seaside that both liberates one from the usual demands of time, whilst also instantaneously establishing a connection and sense of place. Throw in the romance of fishing boats, locals lazily meandering along the

beach and the experience has the potential to be memorable. Occupying the absolute dress circle position, featuring unobstructed split level views, Ceto Restaurant and Bar located in Ulladulla is not only blessed with spectacular natural ambience, but most importantly also has the kitchen brigade to seal the deal. Alex Dawkins, former executive Chef at Bannisters, sensibly keeps the menu accessible yet never condescending for the locals, as establishing trust and respect is rightly the foundation block of all successful regional restaurants.

Ewan McAsh’s Clyde River “Sirens” Sydney Rock and spectacular plump Greenwell Point Pacific Oysters, shucked to order with Champagne foam, chives and Avruga caviar sets the tone perfectly. The lovely lingering resonance of the sea is even more seductive, given the bayside context. An amuse-bouche of tender master stock chicken with roasted eggplant, truffle mayonnaise and crispy wonton momentarily focusses our attention back to the land. Then a ceviche of Yellowfin Tuna, bottarga, cucumber, red capsicum, avocado and crispy sourdough bread, which is a light and harmonious play of both flavour and textures. The diners, a mix of locals and blow ins, gaze and muse upon the benefits of a working harbour, which includes its own seafood co-op, all seemingly within touching distance of the table.

The proficiently hot smoked and seared fillet of Salmon with sorrel, horseradish foam, pickled daikon and dashi gel is executed with both skill and elegance. From experience, whilst most smoking of food generally falls either over or under, this instead exactly hits the mark, bringing the dish another subtle dimension that

Whilst playfully Nouvelle cuisine in appearance, the plump king prawn and mud crab tortellini is hard to fault. The key: velvety and very well-balanced Lobster bisque that works cohesively with the sumptuous fillings, confit tomatoes and consommé gel. Interestingly, the dish has been subject to other variations, but has ultimately worked most effectively in this guise. Sous-vide duck breast, then flashed to crisp the skin, is served with heirloom carrots, wilted spinach, sweet sumo mandarin, and sour cherry sauce. The base aromatics are enhanced by a slow burning cinnamon stick that does meaningfully add another sensory dimension, it must be said. 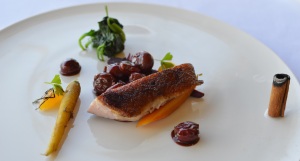 The matched wines completely sync with the degustation, which at $125 fully inclusive, represents exceptional value for money. It may be hard to imagine that slow cooked Wagyu brisket with parsnip puree, forest mushrooms, watercress, caramelised eschallots and Bordelaise sauce is the signature dish in a seaside location with such a plethora of local seafood available. However, diner demand and feedback determines such outcomes, so perhaps the Master Kobe export grade 9 score won the locals over, along with the solid composite flavours and texture of the dish. The fact that they embraced it with such rigour in spring, surely makes it a keeper for winter. 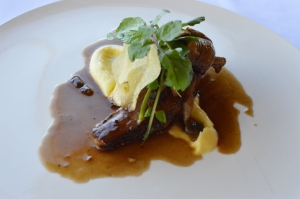 The optimist always believes the next great dish is just around the corner. However, never did I envisage finding the best dessert I had tasted by far this year in Ulladulla, or perhaps even in nearby Mollymook for that matter. This sublime and stunning seasonal dessert from Pastry Chef Jean-Charles Sommer (ex Banc and Bilson’s) is simply perfection on a slate. A compressed carpaccio of new season mango, with lime and lime zest is heavenly in isolation, but with the flawless mango sorbet, fascinating native Australian lemon aspen jelly and vanilla cream and puffed rice, it is elevated to one of those rare and divine moments that just simply makes one sigh. “Coconut on the beach”, is just as conceptually brilliant, and is the second best dessert of the year for me. Decadent coconut semifreddo is layered with white chocolate and dusted with coco to perfectly resemble a coconut. The sand is ‘house made’ ginger

biscuit soil, with cherry jelly and cream made from coconut milk adding the necessary balance, texture and contrast. Both desserts are a celebration of vision and skill, and clearly would not be out-of-place in either a two or three hatted restaurant.

Ceto clearly over delivers for what it initially aimed to be; a modern informal restaurant and bar underpinned by amazing local produce, primarily due to the pedigree in the kitchen with Chef Alex Dawkins (ex Boathouse & Bannisters) and French pastry maestro Jean-Charles Sommer. This is backed up with the experienced Robbie Wiseman (ex Boathouse and Becasse) managing the floor and wine list effortlessly with just the perfect balance of warmth and knowledge for such an idyllic location. The South Coast is undoubtedly emerging as a food destination, driven by talented and passionate Chefs who are inspired by what natural produce is directly accessible to them with negligible food miles.