In late 2009 when I launched this blog, I had no realisation of the generous opportunities that being involved with the hospitality industry would provide. My brief was simple, judge each dish on its merits, and critique accordingly. To have the honour of dining with The Consul-General of Japan, Mr Masato Takaoka and his lovely wife Mrs Yoko Takaoka at their charming residence in Bellevue Hill, was far beyond any of the expectations I had all those years ago. 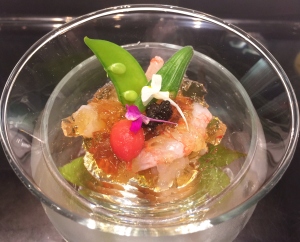 On arrival I was offered a sparkling Sake, which was a wonderful introduction to sublime food and beverages we would be served. Dinner was served in the spacious and formal dining room of the residence that was entirely fitting of the occasion. The setting of the table was absolutely flawless, and the service would not have been out-of-place in any high-end restaurant in Sydney. We started with an exquisite prawn and abalone tosazu jelly, that had both nuance and vibrancy, showcasing the Chef’s understanding of balance of flavour and textures. 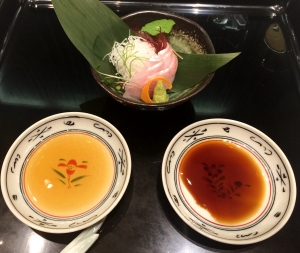 Sitting next to The Consul-General, it was very clear Mr Masato Takaoka was very passionate about his food, with his insightful and intelligent observations. His vast knowledge on the fascinating intricacies of Sake was equally impressive, and his love of Australian wine, was clearly evident. He personally selected the wine to match with the menu. The 2008 Pooles Rock Estate Semillon complimented the pristine Emperador (swordfish) sashimi, served with two variations of soy sauce, particularly well.

The occasion of a private dinner, to showcase and share the joy of Japanese cuisine, provided a lovely and relaxed environment in which to exchange conversation on the synergy between our two cultures, and one could not be more impressed by the genuine depth of the hospitality shown to the guests. The next course, delicate lobster, from simmering with Japanese Pepper tree leaves, and served with taro and Japanese mustard spinach was very well executed.

Steamed snapper with green tea soba noodles, Japanese ginger, grated Japanese white radish and chilli, once again  demonstrated the Chefs skill. The ability to maintain a light touch on the plate, whilst possessing the judgment to counterpoint  with relevance, is a rare and intuitive gift that is nearly impossible to learn.  During the evening, our flight of glasses are topped up, without ever having to ask once. The service flows just  as easily, with  the conversation and laughter, making it a very special experience. 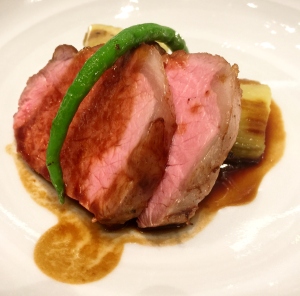 A palate cleanser of green shiso granita is an astute interlude, prior to a flawlessly cooked Cowra lamb roast. It is served with a himo togarashi (green pepper), grilled eggplant, and accompanied by a lightly reduced jus, that works well in this context. Then, the dish of the night, in my humble opinion. Indulgent sea urchin with salmon roe rice, works beautifully with the depth of a divine red miso soup and Japanese pickles.

Dinner ends perfectly with a very skilfully prepared green tea and white chocolate mousse dessert. It was an unforgettable evening of exceptional dining and beverages, that was only equalled by the company. I leave confident in the knowledge that diplomatic relations between Japan and Australia is in very good hands.

LBV sincerely thanks Franz Scheurer for arranging the invitation, and The Consul-General of Japan for the depth of his incredible hospitality.